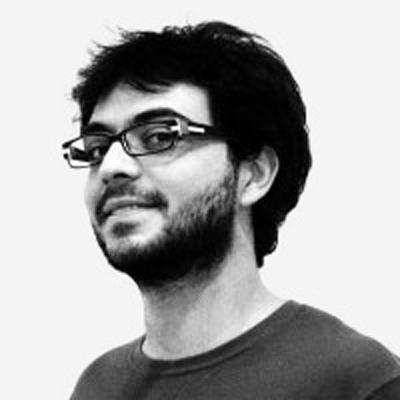 I’m a design practitioner delivering training sessions in different European universities, part of the Service Innovation Academy programme and Service Design master’s degree at Milan Poli.Design. I am also the President of Architecta, the Italian Society for Information Architecture.

I started my design career at Design Against Crime Research Centre (DACRC), an innovation unit of Central Saint Martins, part of the University of the Arts London. DACRC It promotes service design practices to contrast or reduce the opportunity for crime to happen – like preventing bike thefts or improving ATMs users’ personal security for instance – and since it is embedded in the university, it works less as a commercial agency and more as a researching institute.

I co-founded Common Ground LTD in London in 2010 delivering projects following a design agency model for about three years, after which we decided to switch to a network-type organization, formed by specialist consultants that could provide their varied expertise. Despite having sometimes worked on commercial projects, Common Ground has always been primarily focused on social sectors to promote collaborative projects that could generate social value and sustainable impact.

Apparently 2008’s financial crisis dramatically affected service design and innovation agencies. Did it have any impact to your experience as well?

In 2008 I was ending a two years master degree in industrial design at Central Saint Martins in London, following my studies at ISIA Rome and Plymouth University; at that time teachers asked me to go exploring the boundaries of the discipline and since my dissertation was focused on a social enterprise idea focussed on sustainable development and tourism to Sicily, I quickly realised that the solution to that problem was not achievable simply designing a physical product but it needed an interconnected system of products and services instead. Not to mention people, their relationships and cultural beliefs.

"I quickly realised that the solution to that problem was not achievable simply designing a physical product but it needed an interconnected system of products and services instead."

I’ve always been more interested in areas of intangibility, like the one related to interactions between a user and a product/interface. That’s why we created Common Ground and started our own start-up venture, participating to the London’s service design community at that time (Service Design Drinks and Service Design Network events), that helped consolidating the previously fragmented scenario to a more structured network of professionals. Yes, the crisis impacted agencies that started to receive less work from clients and designers who started to look for alternative working solutions.

Do you consider service design discipline to be more functional to commercial or social-innovation projects?

I believe it’s a matter of choice, that have to take into account ethical and economically sustainable perspectives. For instance, agencies like Engine decided in 2011 to reduce their public-sector activities although they have probably delivered some of the best project in this area with Kent County Council just few years earlier. I’m pretty sure that organizations like ThinkPublic, UsCreates or Snook would say that they are specifically interested in working within the public sector even if to me 80% of the effort is usually spent in educating the client and only 20% in the actual design of the service. I’ve worked with many organizations in the UK and I believe the most interesting ones are cross-sector that involve the participation of multiple stakeholders.

Which services are required by clients?

Most of the times clients aren’t really sure about what they want – except they always want to engage more customers. When we work on commercial projects, we often end up in developing some sort of marketing strategies as not many of our clients are actually interested in improving their business’ customer experience. They often want something specific – for instance they believe they need to develop an app – so it’s up to you implementing some service optimisation or explaining them that they might not need an app at all.
I also work within education for organizations – they might be companies, universities or governments, that are just interested to learn about design-thinking and innovation processes. I think 50% of clients I work for are in governments/public sector and the other 50% lay in the private sector – but the majority of our incomes is from training or commercial projects.

How many people were involved in Common Ground?

It was formed by the two founding members and involved up to six people for specific projects. Our goal was to be a trusted network of talented people that would be working on social innovation projects, hence we did not want our structure to be the same as a traditional commercial agency. While my partner was in charge of project management I’ve been mostly working on networking and facilitating stakeholders’ conversations. We developed projects across Portugal and the UK until 2013 when I decided to go back to Italy. In February 2016 the company started a new life and was relaunched as commonground Srl, an organization based in Siracusa and interested in developing design thinking and creative model for Mediterranean economies. We are two partners, working with a network of collaborators to promote projects such as Service Design South, a two weeks intense immersive experience on the theory and practice of service design. The second edition will run during Summer 2016 and have a hybrid group of international professionals joining us in Sicily.

You already came across Product Service System Design course. How do you see designers with such a background in a design agency?

I believe PSSD brings a very holistic approach which unfortunately is often not taken in consideration in agencies that work very technically on a specific topic. For instance, digital agencies won’t be interested in considering physical products aspects.

"I’m not sure it can be sold as a specific role, but the course is a complete training to understanding complex situation and working on a details scale too. "

I’ve rarely seen this definition outside Italian system but I believe it’s a very complete and precise way to describe what a product service system designer is capable of managing. I’m not sure it can be sold as a specific role, but the course is a complete training to understanding complex situation and working on a details scale too. Those zooming-in and zooming-out skills are usually managed only by experience professionals that are able to map complex problems and then act on different levels.

How do you believe service design will evolve in the next few years?

That’s a hard one, it would need a collective answer! When ten years ago people were talking about digital economy, nobody believed that those intangible solutions would have become so important. Today we are in a service economy, considering that over 80% of money is spent in services instead of production. This will lead to an increasingly demand of carefully designed services. The same kind of needs will increasingly be taken into account by governments and the demand from external consultancy will be slowly replaced developing internal capabilities.